Why you shouldn't remove your car's DPF

What is a Diesel Particulate Filter?

The diesel particulate filter (or DPF) captures exhaust soot which has to be 'burned off' in order to regenerate the DPF, helping to prevent black smoke and reducing harmful emissions. If it is not regenerated regularly, through longer motorway journeys for example, the filter may need to be cleaned, or even replaced, which can be costly for the vehicle owner. We have more detail on DPFs here.

Why would anyone remove a DPF?

Deliberately removing a Diesel Particulate Filter is seen by some drivers (and companies offering this service) as a more cost effective way of running their vehicle, when this should of course be down to more compatible driving habits to suit diesel vehicles. Removing a DPF is also seen as a cheaper option than buying a new DPF - while this is true in the short-term, the long-term costs of removing a DPF could be huge.

Why you should never remove your DPF

In short, it’s illegal – since 2014, it has been an MOT failure, and in 2018, the MOT test became much more stringent. The MOT DPF check has been flawed – it relies on a visual check only, and it can be difficult to tell if a DPF has been removed just by looking. The Government has strengthened the MOT guidelines in a bid to improve checks for DPFs. Here is the new wording: 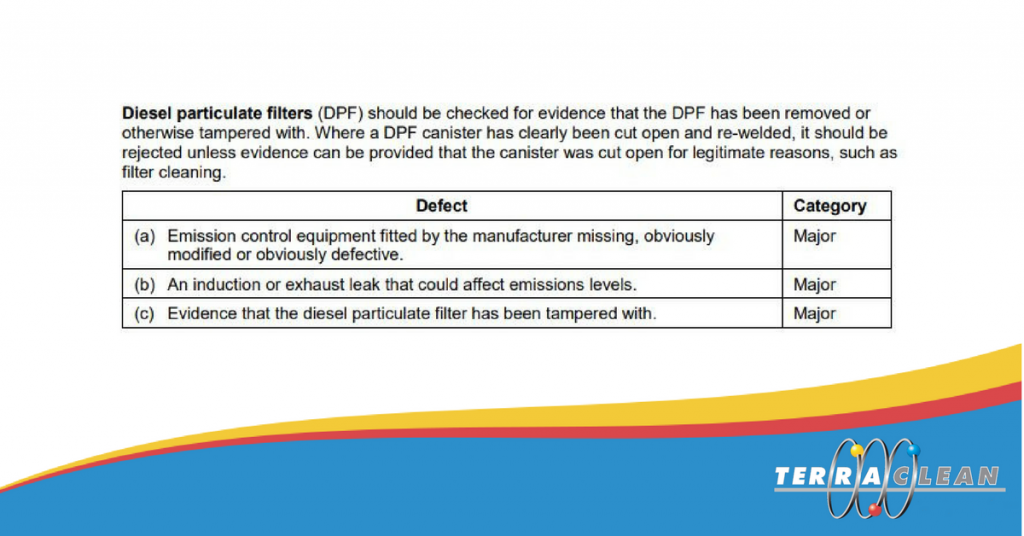 Anybody's car with a removed DPF could face a fine, or a bill of potentially more than £1,000 to replace the part. The internet is, of course, full of people who will tell you they’ve had their DPF removed and never had a problem, and there are plenty of companies advertising DPF removal and making it look like a viable solution to a clogged DPF. Don’t listen: they might not have had a problem before, but there’s  a strong chance they’re getting caught out soon. If you are buying a second-hand diesel car in the next couple of years, we strongly recommend you do so with extreme caution. Insist that it has a full 12-month MOT and ask if it’s had its DPF removed. If you buy a car with no DPF, you could be facing a huge bill next time it requires an MOT.

My DPF is blocked – what should I do?

If this is the first time you’ve seen the warning light, then taking the car for a long motorway drive (basically you need to be going faster than 40mph) might start the regeneration process, and might be enough to clear the blockage. However, if the light isn’t going away, and your car’s performance is impaired, or you notice strong exhaust smells, then you might have a bigger problem. Fortunately, help is at hand, and it can work out much cheaper than having to replace the DPF. TerraClean can clean a DPF. It’s not part of a standard TerraClean fuel system clean, but uses the same principles. The cost can work out much, much less than replacing the DPF, and helps keep you on the right side of the law and the MOT testers. Plus, our qualified technicians can help to diagnose the fault, and let you know what is causing the issue in the first place. If you believe your DPF may be blocked, then you can find your nearest TerraClean agent by entering your postcode here – they’ll be happy to talk through the issue with you and give you honest advice about the best approach. Head to our home page to learn more, or enter your postcode below to find your nearest dealer. DPF Removal Resources For more information about the removal of a DPF please see here - DPF now part of MOT Test

Didn't find the Answer? Ask Us a Question